Sometimes we forget that what we do every day... it's not normal. Below is a reminder from one of our new juniors - Haochen Wang. A story about new experiences, pushing boundaries and setting a new baseline.

Biking from Takapuna to Matakana

Dawn, I prepared to leave in the misty fog. Today I will attempt to ride 90 kilometers from Takapuna to Matakana. This is the first time in my life that I will have ridden a bike this far. So for the past few days, I have been extremely nervous about the upcoming endeavour.

Still in a sleepy mood, I wasn't able to fully prepare all the necessary equipment that I needed before I hit the road. On the road, looking out into the foggy darkness, the realization that I was about to ride almost 100 kilometers sank in. The butterflies in my stomach fluttered even faster at the sight of the adversity looming in front of me.

When I arrived at the boating club, the rising sun calmed my nervousness. I got off the car to try my bike shoes. Although I did try them yesterday, it was only for a short 3 kilometer ride. I am yet to ride anything this long in these shoes. I did a little lap around the car park, as I was finishing and preparing to stop by the car, I failed to twist my shoe out of the pedal, and I fell over as one with the bike. This was the first time I fell over on a road bike. 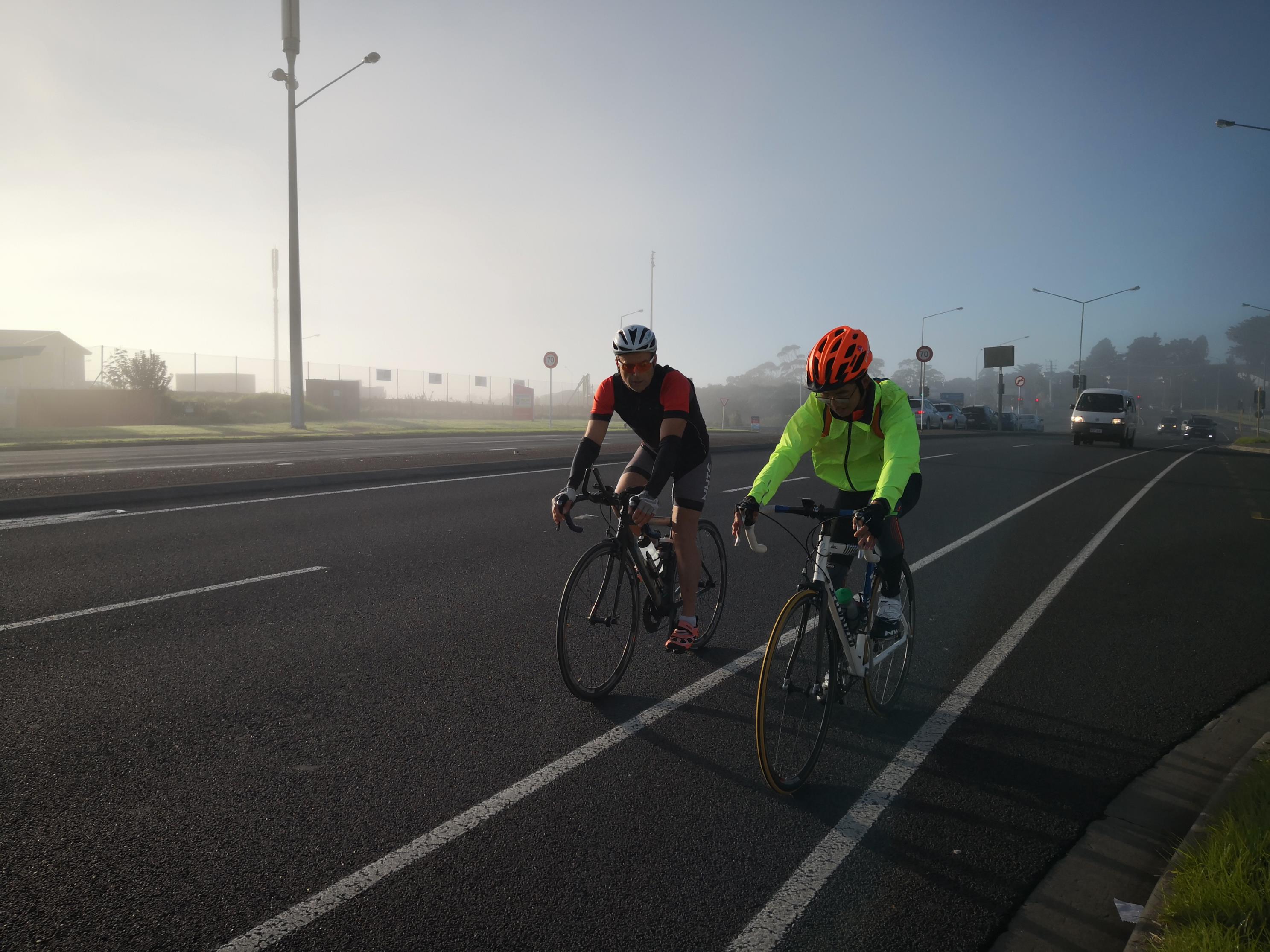 Soon, with the rising of the sun, more and more of the club members appeared. Most of them came riding their bikes. I was very shocked to see that today's ride didn't appear to be an issue for most of them. After we finished briefing with Steve, it was time to hit the road. In the thick fog, my glasses soon became covered with tiny water droplets. My courage and will power all decreased, as I feared that I would crash due to my decreased ability to see. Thus, excitement wasn't the only reason my adrenaline was pumping. But as it was Saturday morning, the traffic wasn't too bad. However, soon enough, we still reached our first traffic light. It was time to face one of my biggest road biking fears: the problem of whether I would be able to click into my pedal after the green light. Thankfully, I was able to do so, for every traffic light. 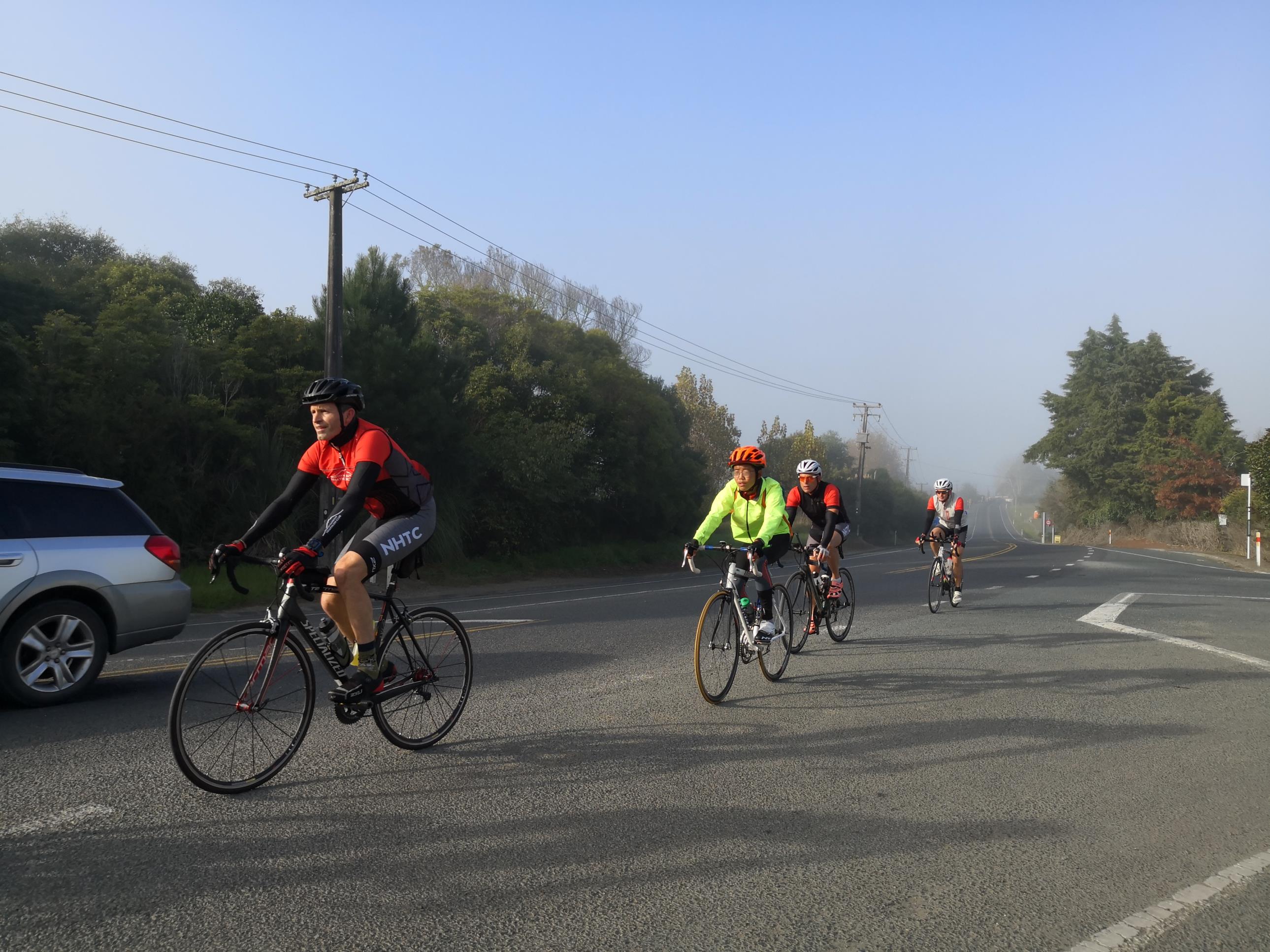 Soon enough, we were out of the urban area and onto Dairy Flat highway, and thus began the first big hill of the day. That was when I started to feel a pain creeping into my lower back and waist. All along the way, Steve and other riders were continuously supporting me and giving me advice. But unfortunately, other than the hand signals, most pieces of advice just flew past my ears as the wind roared louder than anyone could yell.

The team eventually split into two groups, one was around me and was kind enough to stay around me and help me. While the other group raced ahead and soon enough, I lost them in the distance. Leading them was Claudia, who was incredibly fast the whole way!

When we were on the upslope, Steve could see that I was struggling. And thus, gave me a hand by pushing me. For him to be able to push me and simultaneously ride a bike uphill with ease made me look up to him immensely. Of course, I looked up to everyone there for their incredible endurance and willpower.

Finally, the painful uphill is over. We began the downhill ride. That is when I realized, the real danger and horror of road riding is downhills. Especially when the hills are very steep, because I fear going downhill too fast, so I have to constantly control the brakes. And thus my forearms have endured a lot of punishment today.

All along the way, my parents, being loyal supporters of the club, accompanied us the whole way. Taking plenty of photos. Other members of the club were able to smile and wave when they saw the camera. But me, I can only muster a pathetic little smile.
Especially when I saw them after riding 20 kilometers, I just felt that I was about to be cut in half. Then Steve, came by me and asked if I was doing ok. I told him that my back really hurt, and within seconds, I received my personal "diagnosis". Which was that my stem was too long and my seat was too far back, which caused my whole body to stretch and consequently hurt my back.
Finally, we arrived at Kaukapakapa and thus I temporarily stopped my journey. And joined my parents in the car. After bidding a short farewell to my teammates who would carry on biking towards Matakana, we drove instead of biking. And in a short while, we stopped to take photos of them riding towards us as fast as wind.

Hurting everywhere, I had never felt more comfortable sitting in a car. But when I thought that I had to get off in around 10 minutes, I was very conflicted. Soon we arrived at West Coast Road, where I was supposed to get off. Then I had an intense mental battle, a lot of me wanted to just give up and stay in the car. But in the end, I overcame the lethargy and got on the bike.
During the first few kilometres of West Coast Road, it was very flat and easy. But soon, rising up in the distance I saw endless rolling hills. If it was any other time, I would have taken my time to enjoy the beautiful scenery. While I still did today, it still took its toll on my spirit. So, I rode slowly up the hill, awaiting the arrival of my fellow riders. But they didn't catch up for a long time. And my parents soon left me in the dust, and I was all alone, riding on a seemingly endless hill... 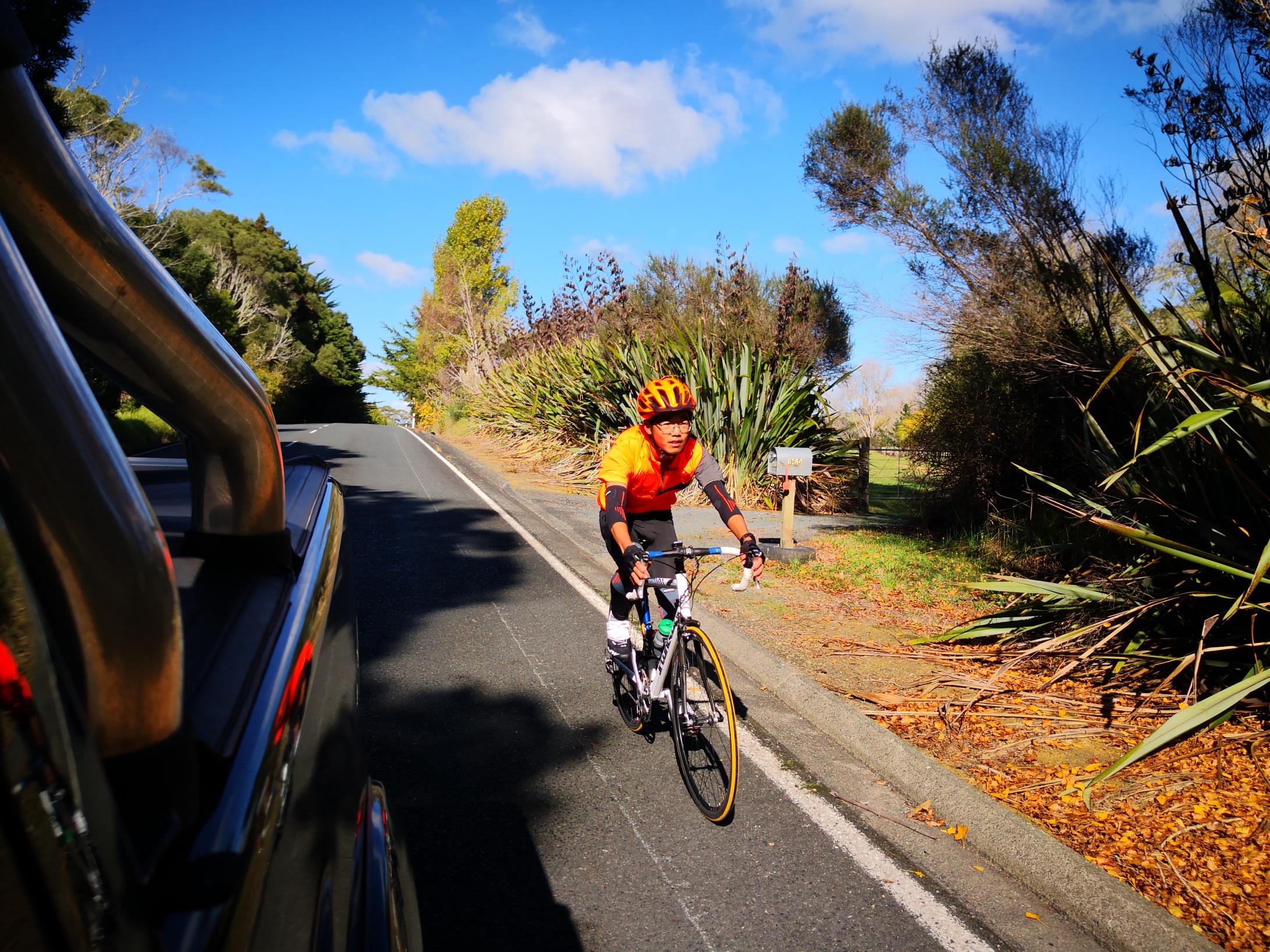 Then I arrived at the actual uphill and was very sad. So instead of attacking it and trying to defeat it quickly, I laid back and rode up it slowly. Every time I was about to stop and give up, I saw a glimmer of hope and that was the flat part of the road.
After riding about 10 kilometers, I heard behind me the other riders coming up, and within a minute, I was overtaken. I would see them again in Matakana.

After riding about 17 kilometers, I saw a junction, with a road leading off called "Old Woodcocks Road" I remembered my dad saying something about turning into a road with "Woodcocks" in it, so I decided to take the risk. After biking about 2 to 3 kilometers, I felt that something was wrong and decided to go back. As all the time I was on that road, I didn't see any sign of Warkworth. And since I didn't have a phone or any other means of communication, I had to make a choice based purely on my instincts, and thankfully I was right this time. After turning back onto the main road, I biked to the top of another big hill and as I overcame it, I saw ahead of me the steepest downhill I have encountered the entire trip. And riding down it was the worst few minutes of my life. As I had to constantly brake and thus my forearms felt as if they were being torn apart.

After finishing that hill, I was soon rescued by my parents. And by then, all my courage and persistence had disappeared into nothingness. I felt my legs turn to jelly and crashed into the car.

Thankfully, after getting on the car, I don't have to get off to ride a bike again for the day. Although, I really enjoyed riding today and I look forward to riding again in the near future. 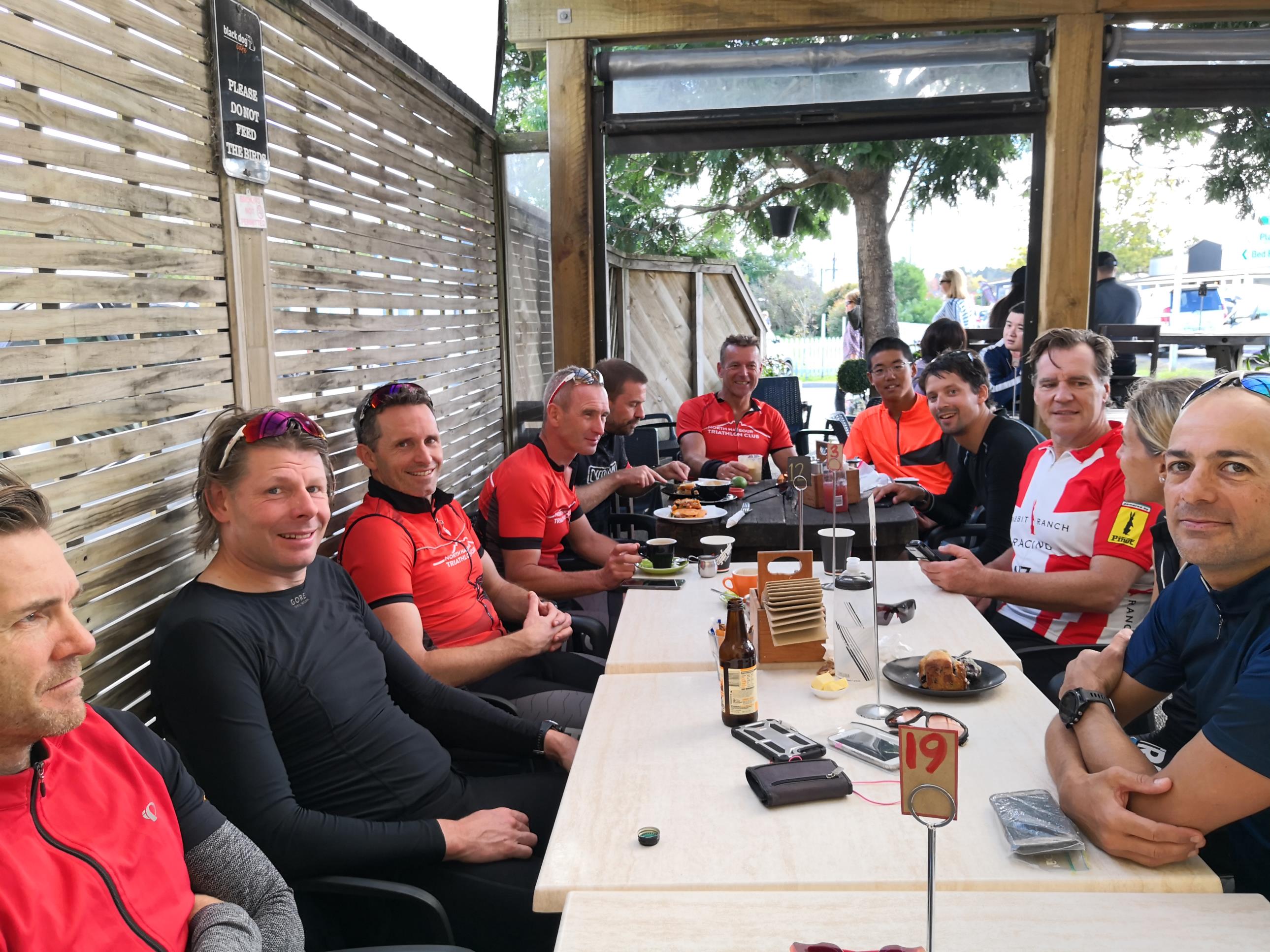 When we arrived in Matakana, we bid our team members a short goodbye and headed home. Today's experience was truly unforgettable and has made me crave to ride another long-distance ride. And I am also very grateful for the members of NHTC and our coach, Steve, for helping and guiding me along the way. Without them I definitely couldn't have biked 60~70 kilometers!